Hello all! I’m delighted to feature another guest post on the website today, this time from the incredibly talented Glasgow-based spoken word artist Shannon MacGregor. Shannon came onto the scene like a thunderbolt in 2015, wowing crowds with her sharply written and dynamically delivered work. She recently represented Team Glasgow at the 2017 UK UniSlam. In addition to being an inspiring poet and performer, Shannon also supports the scene by co-organising Aloud, the poetry open mic at the University of Glasgow.

Here, Shannon shares some insights on her experiences being an artist in the Glasgow spoken word scene. Enjoy! 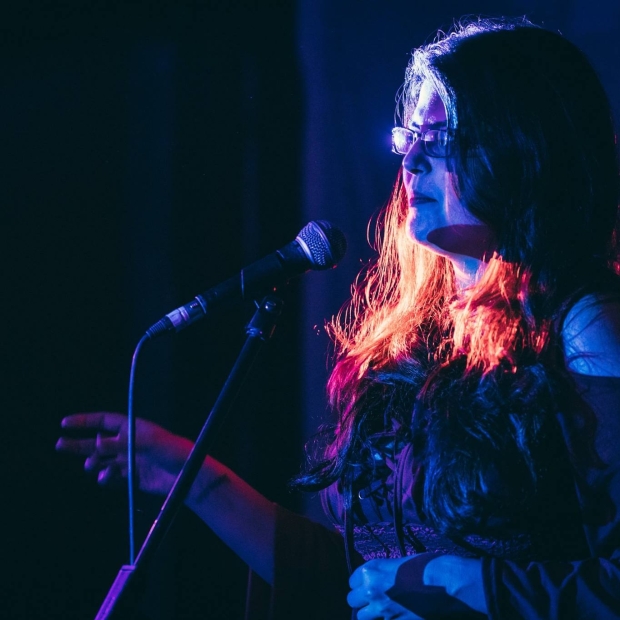 Imagine a dimly lit alleyway, a small crack between the blocks of fluorescent shop fronts that reeks of cigarette smoke and decomposition. Half hidden behind an overflowing black bin, rollie in hand, is a tall, slender man in a beige trenchcoat, hat tilted so as to obscure his face from view. He gestures to you.

“Hey kid,” he hisses from the shadows, hands ushering you forward. “Hey, c’mere.” He nods slowly as you move gingerly closer, one bony hand sliding under the folds of his coat. Shivering, he wipes his nose with the back of his sleeve.

This, effectively, is how you enter the Glasgow spoken word scene.

I started attending Aloud in 2015, where I first met gateway-drug-to-poetry Ross McFarlane, half of its hosting team. He then introduced me to Katie, Sam Small, Liam McCormick – a whirlwind of names and nights and places to be. What still strikes me is how absolutely enthusiastic everyone is about new talent – there is no snobbery, no ‘we’ve been doing this longer.’ Glasgow, Edinburgh and Scottish poets outwith that region are all thrilled to include new words and perspectives, regardless of social class, gender, sexuality etc. Differences not only in character but in style are encouraged, and this has led to such a diverse set of voices that it is hard for me to believe that there is anything homogenous about the Scottish scene stylistically.

Of course, while most poetry networks across Scotland are heavily interconnected, my primary experience is that of the Glasgow scene, one which I would argue has the feel of a renaissance in its earliest beginnings.

And it is, in some ways, a pseudo-renaissance. Arguably, the emphasis on performance and oral culture is a call to that, with pressure placed on the vocalisation of one’s piece above its page presence. Of additional note is the ease with which the Scots vernacular slips into these works. While MacDiarmid and his contemporaries had to petition for the right to use their mother tongue in poetic verse, we face no such opposition. Perhaps this is because Glaswegian spoken word is, in a sense, more conversational. This is not to say it is any less rhythmic or artistic in its delivery, only that spoken word so often becomes a conversation – with one’s audience, muse, or whoever it is addressed to. The emphasis is not on pretty lines and flowery language, but on overall sentiment, like a three am cocaine-high chat in someone’s kitchen.

I do not think of this, necessarily, as a bad thing. In fact, amid a tapestry of such varied style and meter, the common goal of blatant communication through such an intimidating and yet vulnerable platform is nothing less than applause worthy.

Of additional note is Glasgow’s close ties with political culture – unsurprising, given the combination of a large working class population, feelings of unrest regarding inequality and injustice, and its people’s natural boldness. Art has always had a prominent effect on the political – the growth in popularity of Johnny Cypher’s Universal Basic Income comes a little too close to the upsurge in discussion about it to be called a coincidence. Works such as Victoria McNulty’s ‘Coffins for Derry’ gain traction outside of the community and are shared worldwide, an artful expression of frustration and empathy for the plight of refugees. Even on a less institutional scale, pieces exploring gender binary (A Crow), the silencing of the transgender community (Elaine Gallagher) and the importance of standing up for the rights of your fellow human are explored in depth, and constantly. There is a strong sense of a desire for change, a thirst to humanise struggle and express frustration and depletion, yes, but also hope, camaraderie, how sometimes you have to just call them a cunt and walk away. Laughter surrounds so much of it because Glasgow, to some extent, laughs at its problems, shrugs them off with passive aggressive tweets and calling Donald Trump a bawbag – which he is, by the way, no one is disputing that.

And sometimes you need that. Sometimes you need to see people express similar frustration, similar pain and toil, and laugh it off, find the light that leaks through. It gives you hope, and I think we all need a little more of that right now.

So go. Be part of it. There is a warmth, a drive and a passion to every aspect of the Scottish poetry scene that is not only endlessly compelling, but inspiring to just be around.

And you deserve that.

Thanks to Shannon for sharing her perspective! Do you have something you’d like to discuss or share in this space? I’m always interested in featuring different perspectives on contemporary art-making, particularly those focused on Scottish art and/or contemporary performance poetry. If you have an idea for a post, please the Contact form on this site to get in touch! -K

One thought on “Guest Post: Shannon MacGregor on the Glasgow Scene”